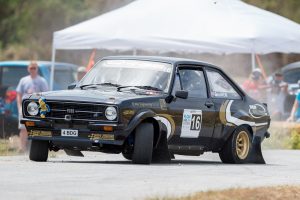 Weir Rallying are celebrating their ‘Historic Class’ win after returning from the Sol Rally, Barbados with their MK2 Escort. Not only did they win their class, but came 15th overall, a fantastic achievement by any standard.

Rob Weir, Team Principal said “We’re thrilled with the result, finishing beyond our wildest expectations. After a great start, it just got better and better as the stages progressed. The vehicle ran faultlessly, returning with not even a scratch to the paintwork.”

Driven by Alex Allingham who joined Weir Rallying in August 2018, he comes from an accomplished background after previously winning the Welsh GravelChampionship in 2010, 11 and 2014, Co-driver Ross Weir of HJ Weir Engineering, Chepstow, alongside Alex, with Rob Weir as team principal.

The event started with the King of the Hill, while disappointed with the initial allocated seeded position, the team made up fantastic time, and placing them in 1st Overall Historic and 25th place overall. Co-driver Ross Weir worked alongside Alex to recce the route, ensuring they were best equipped to tackle the later stages.

Friday night saw the start of the night stages which ran through Bushy Park which featured thousands of spectators who had gathered to support the event and see the race in action. Saturday saw 10 stages centred around the north and middle of the island where roads were closed to make way for the event. Sunday continued with fantastic action with a further 10 stages focusing on the South East region, culminating with stage 23 as a ’Super Special Stage’ which took place at Vaucluse Raceway. Thousands of locals supported the event where the stadium was swamped with onlookers.

Rob Weir mentioned “I want to thank Alex, Ross and the support team behind the scenes that make things possible, together with a special thanks to the event organisers and locals who made us feel so welcome, their support means so much to Weir Rallying”.

To find out more about Weir Rallying, check out www.weirrallying.co.uk and our social channels.